Just as other States and Union Territories (UT) across the country have done, the UT of Jammu and Kashmir has submitted three entries for the Swachh Sundar Samudayik Shauchalaya (SSSS) competition: Reasi District, Bari-Brahmana Block and Gund-A Panchayat.

SSSS is a people’s campaign that supports the construction, painting, and maintenance of community toilets.   The objective is to ensure that toilets are made available in public areas of rural India, particularly for the floating population and migrant labourers.

Reasi District:  This district was nominated for excellent work of construction, beautification and maintenance of the community sanitary complex built under SBM-G in Aghar Jitto Panchayat in Katra Block of Reasi.  The Panchayat with a predominantly SC/ST population that exceeds 50 per cent of total inhabitants, had constructed a CSC in 2019-20.  With separate units for men and women, the CSC is maintained by the GP with the support of community members that ensure that proper cleanliness is ensured.  For the competition, local themes were creatively painted on the walls of the CSC. 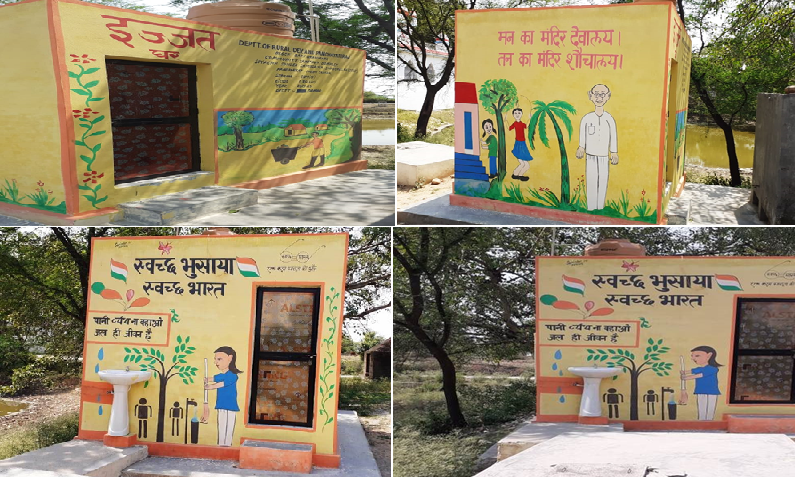 Bari-Brahamana Block, District Samba:  Another GP with a predominant SC (50%)/ST (31%) population is Meen Sarkar in Bari-Brahamana Block which has been nominated for its beautiful CSC built in 2019-20.  Like the other CSCs built across the State, there are separate facilities for men and women.  All these units were painted and are being maintained by the GP.

Gund-A GP, Gund Block, Ganderbal District:  With a population of 1640 of which 790 are female, this panchayat had a CSC built in 2019-20 near the Block Development Office which is on the route to Shri Amarnath Yatra.  Hence this facility which has separate units for men and women effectively caters to the needs of the floating population.  It is being maintained by the Gram Panchayat with the support of community members and proper cleanliness is being ensured.