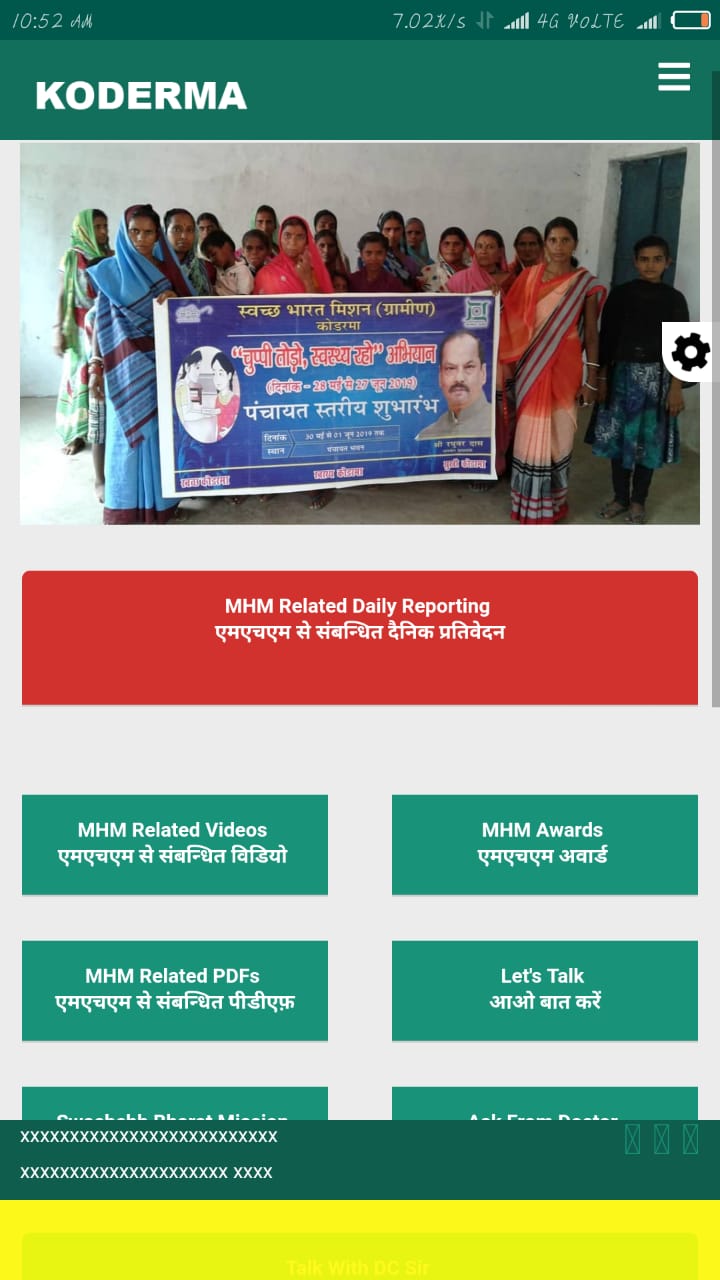 Imagine getting your personal questions answered anonymously!  That’s the service adolescent girls and women in Koderma district of Jharkhand can now avail of with the new MHM (Menstrual Hygiene Management) App.

Developed by the District Administration under the careful supervision of Deputy Commissioner, Koderma; the App that provides vital information is now available on Google Play Store and can be downloaded by anyone.

According to official data, it was originally designed with the objective of making citizens aware of various Government Schemes and programmes. It also provides a platform for filing complaints.  Currently, there are more than 13 pages related to various government schemes, Meet the DC, Mukhyamantri Jan Samvad, as well as several other programmes.

With the initiation of Chuppi Todo – Swasth Raho Campaign, it was suggested that a separate page be created by the name of Swachh Bharat Mission (Menstrual Hygiene Management) which would be utilized to spread awareness as well as to monitor the various efforts and activities being carried out under the campaign.

The App contains various images, videos and documents related to Menstrual Hygiene Management. Also included are several interactive features such as ‘Ask questions from a Doctor.’ Anyone can access these files, after registering on the App.

Specifically, the MHM App has been designed to help menstrual warriors (those who provide awareness on MHM) to conduct the MHM program more effectively. During field level programmes they often use the videos on the App to better explain details.  In addition, they guide participants about how to install the App on their mobile phones to enable them to access those files whenever they need it in future.

The initiative has received very positive response from citizens. It has helped spread awareness regarding myths and stigma related to menstruation. To date, 1833 people including SHG members, sevikas, teachers, students, staff and other citizens have downloaded the App and are using it.

Users’ comments on the MHM App:

Santoshi Devi (Jharna Kund, Sevika):  I used the MHM app during meetings at the Anganwadi Center and it was very helpful. It helped me to grasp the attention of people.

Mira Devi (Jhalpo, Sevika):  The videos in the App helped me immensely in spreading awareness on menstruation.

Ram Kumar (Block Coordinator, SBMG):  Videos are a great tool to spread awareness on any subject.  And when it comes to menstruation, a topic which people do not talk about openly, the videos in the App were a great help during discussions. I encourage people to download the App.

Laxmi Kumari, Jhalpo:  I used the App to show videos to my friends, bhabhi (sister in law) and mother.